Yours truly, reporting for Wired:

Of course, elaborate, amenity-filled campuses are nothing new to Silicon Valley’s big tech firms. Google’s microcosm looks and feels like nothing so much as a college campus with a zillion-dollar endowment. Many current Facebook employees presumably eat at the Facebook BBQ pit, relax on the Facebook plaza, and exercise at the Facebook climbing wall. But adding housing is something new. If this real estate move goes through, about 300 of those Facebookers will soon sleep in a Facebook apartment. I’m sure many of them will “like” that arrangement.

The most charitable interpretation of all this is that Facebook is building the first arcology, like what the fantasist architect Paolo Soleri described and halfway (well, eighth-way) built at Arcosanti, his own little urban microcosm in the Arizona desert. Arcologies were supposed to be self-contained cities-in-a-bottle, live-work-play spaces that were self-sustaining, with teeny ecological footprints.

But if you want to be less charitable, Facebookville might still sound familiar. The company is really just creating a version of the company town, something that was all the rage among wealthy industrialists in the early 20th century. 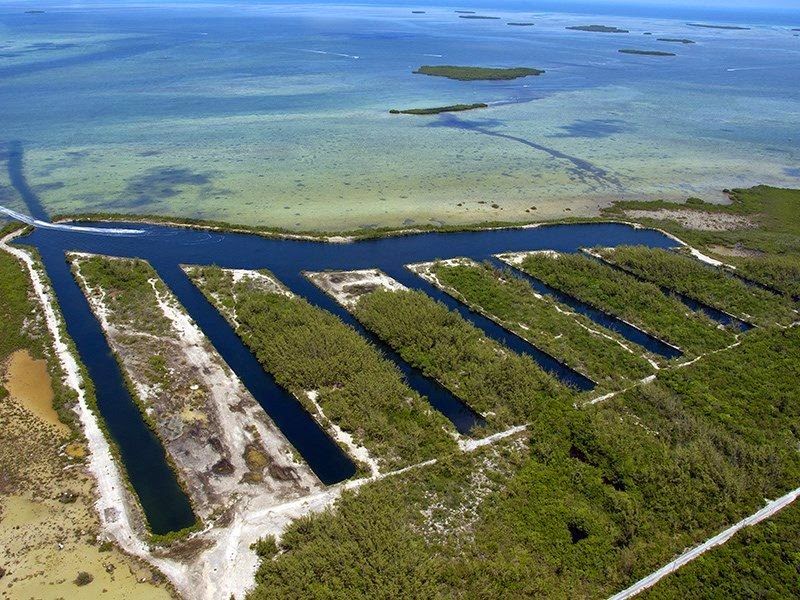 Back to opportunities in real estate: if you were tempted by the Minneapolis skyway but you're saving your money for something a bit warmer throughout the year, consider snapping up the "Submarine Pits on Boca Chica Key." 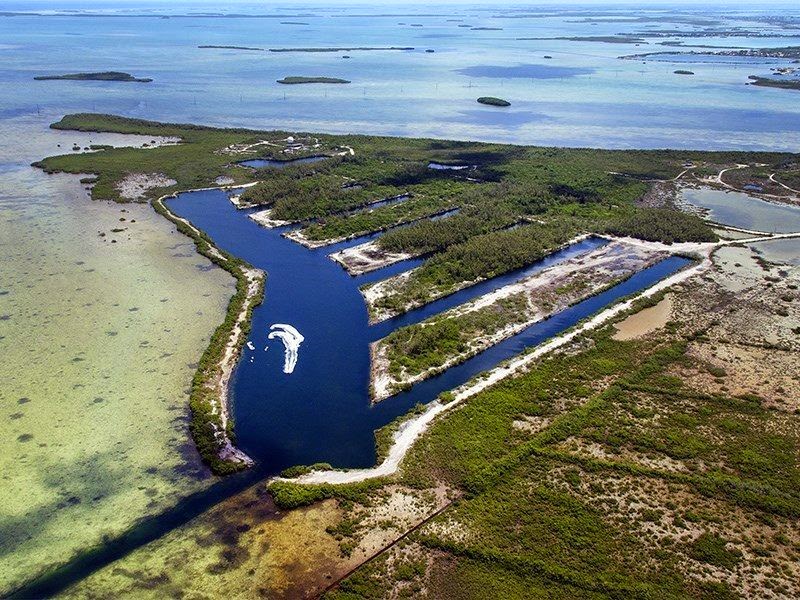 As Sotheby's describes the carved landscape of submarine docking pens, the pits can be found amidst "approximately 122 acres of vacant land just north of Key West."

Here's the site on Google Maps. 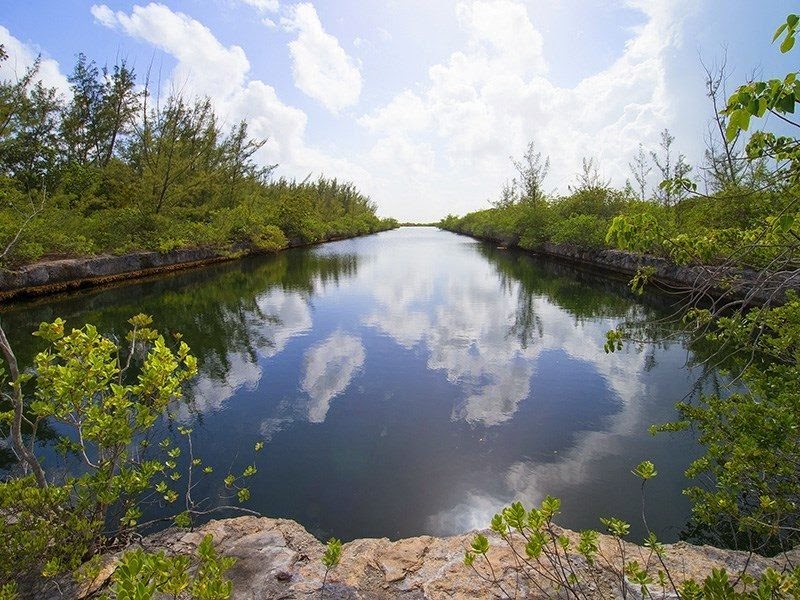 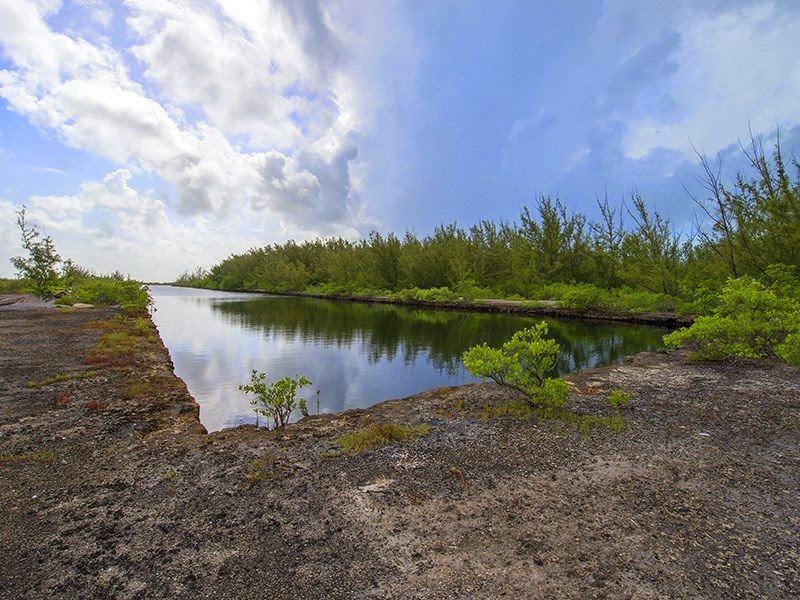 They're basically just deep slots blasted through the coral and limestone, barely visible beneath the water line in the form of somewhat ominous black strips where the ground drops away. 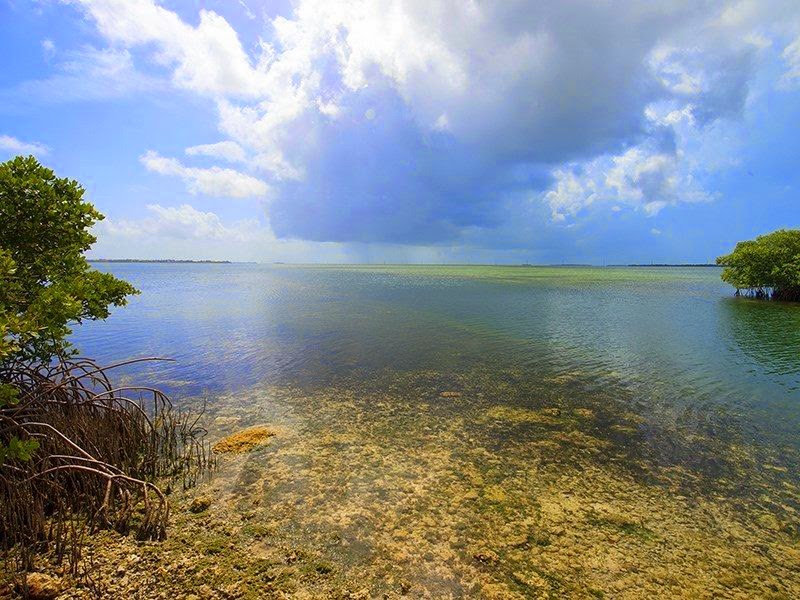 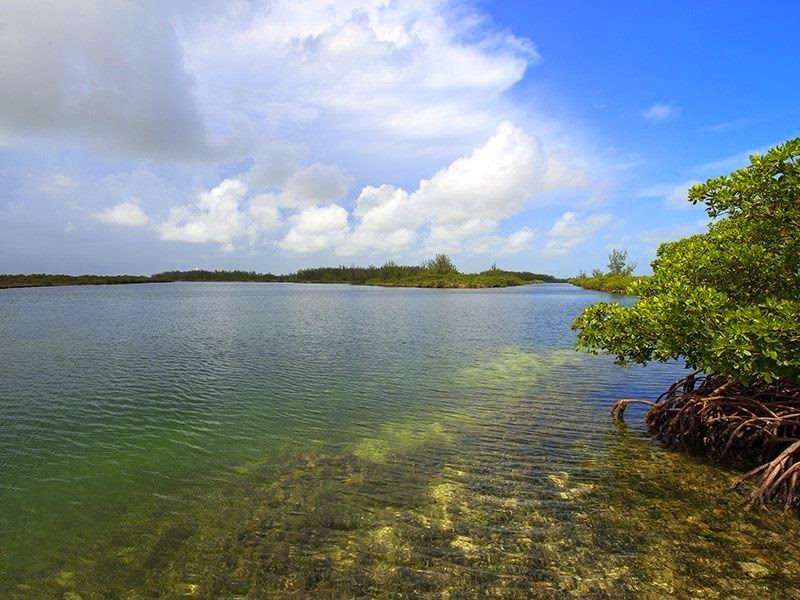 The site is zoned as a "Commercial Fishing Special District," perhaps implying some future reuse of the submarine pens as exotic fish farms.

But imagine all the weird opportunities here for submerged foundations, underwater hotel rooms, or other half-aquatic facilities—even something like the Danish National Maritime Museum by BIG—looped in and around these linear, Nazca-like features. 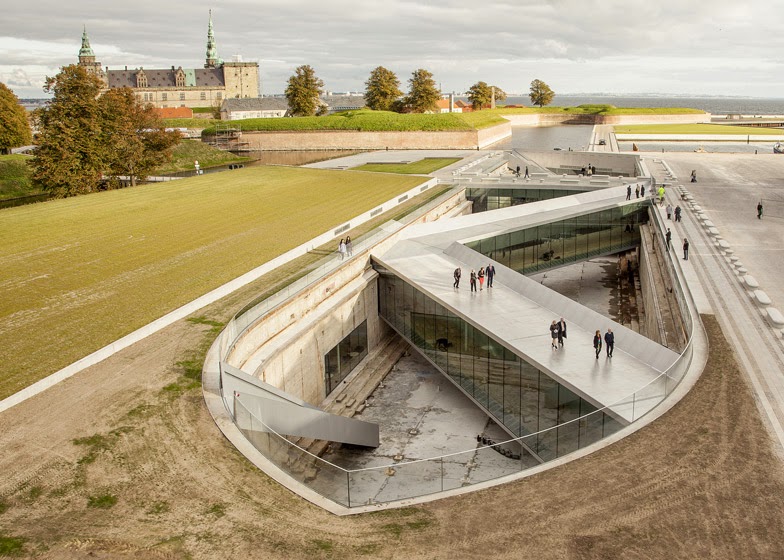 This parcel was used by the Navy Air Station to house its submarine war ships during the Cuban Missile Crisis and has a very colorful and distinct history. Perfect for marine use and development in a great location. Property includes seven finger cut coral canals that are 90 feet wide and over 25 feet deep, plus a deep water basin with dredged entry channel that provides passage to Boca Chica Channel (Oceanside) and Key West Harbor (Bayside). 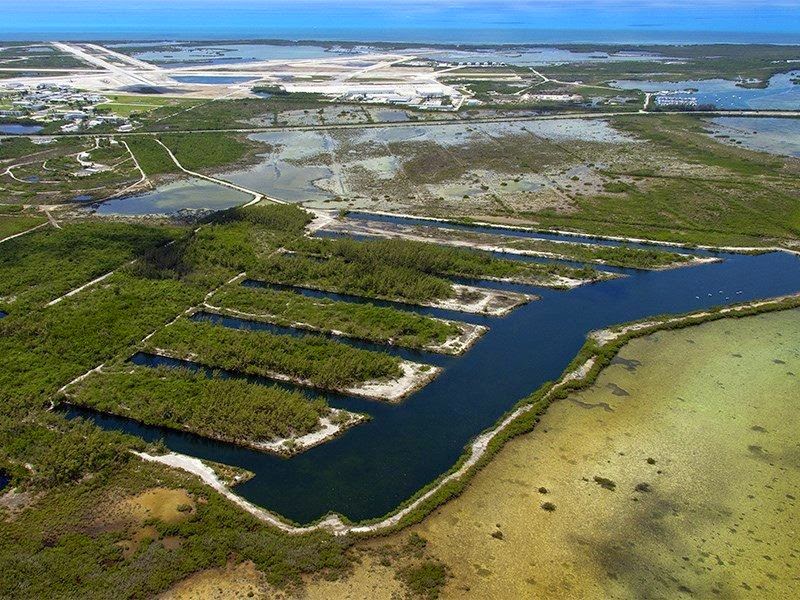 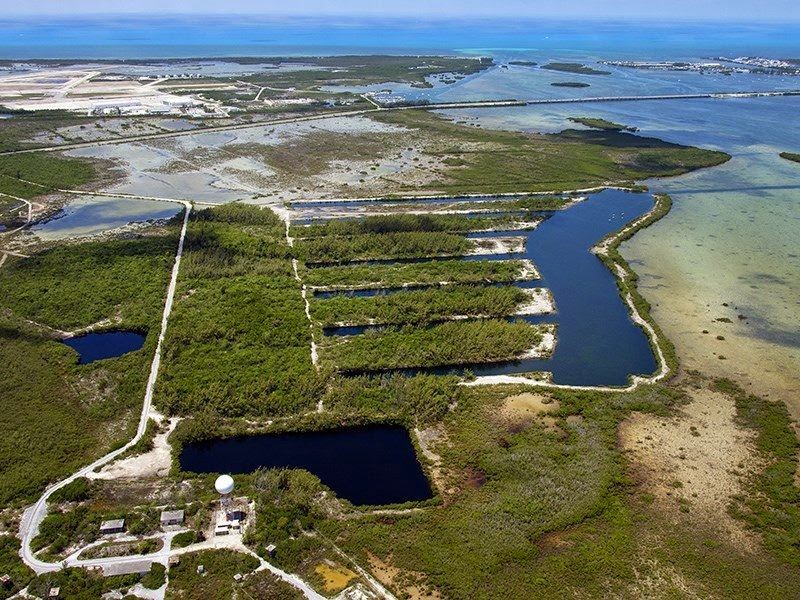 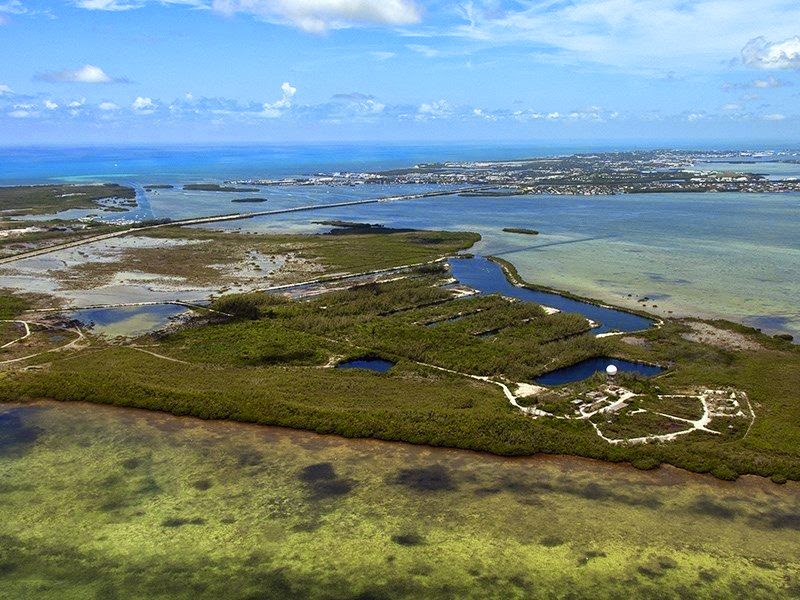 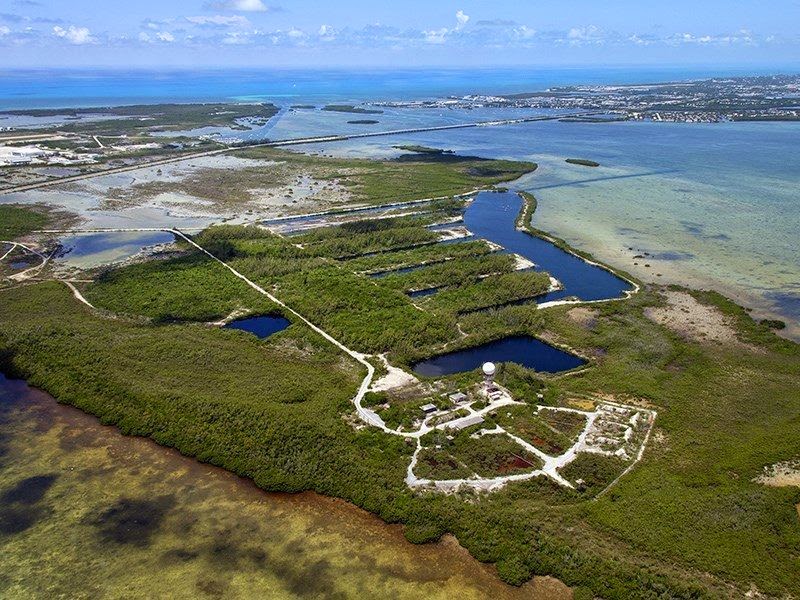 A mere $21.2 million—but then these drowned geoglyphs in the semitropical sun can be all yours. effingunicorns
reply
Conspiracy to attempt group criminal vampirism on horseback is what I'm going down for.

SWAPI is a new web service will use a RESTful interface to return JSON about the "Planets, Spaceships, Vehicles, People, Films and Species" from all six of the Star Wars movies. This API would be really useful if Disney would have done as Matt Webb suggested and turned Star Wars into a genre rather than a franchise.

Imagine, imagine if Disney had said: Star Wars isn't a franchise, it's a genre.

The legendary galaxy, a long time ago, far far away, is well understood: What's true is what's in the Holocron continuity database.

Open the Holocron. Show everyone what's in it. Let it become history.

Then let anyone make movies and books that share the Star Wars world. Not like all those other franchises that argue about what's canon and what's not... rise above it, become a new shared set of conventions, formulas, history and myth, just like the western but for the 21st century.

My friend David suggested something similar with Harry Potter a few years ago...open it up and let any director take a shot at making Potter movies. Open source franchises.

Earlier this year a trend called “normcore” got a lot of press. Normcore is a fashion idea based on wearing boring, undistinguished clothing such as that from the Gap. Jerry Seinfeld is a normcore fashion icon.

While normcore was at least in part a joke, I think it illustrates why trend chasing by uncool cities will never make them cool. So you live in some place which isn’t on everyone’s list of the coolest cities. You read all about what’s happening in places like Brooklyn with micro-roasters, micro-breweries, cupcake shops, and artisanal pickles, and you’re like wow, my city has all that now, too. We’ve arrived.

No you haven’t. Do you think for a minute that the cool kids are going to let you just catch up and join the club? It doesn’t work that way. By the time you get to where they were, they’ve moved on to something else. You’ll never catch up doing it that way.

The idea of normcore, though probably just ephemera, shows how quickly the script could be flipped on you. Just as you finally master pretentious esoterica, the cool kids suddenly revert back to ordinary.

I wouldn’t be totally surprised to see something like that happen, actually. While I shouldn’t underestimate the ability of creative people to continue playing leapfrog to new levels of local, bespoke, exclusive, etc., at some point that trend will be played out. Then were do you go? Back to the comfort of ordinary.

Just when your Rust Belt burg finally has seven different artisanal pickle purveyors, don’t be surprised when the New York Times does an article talking about how the latest trend in Brooklyn is Vlasic kosher dill spears. (In an era in which Millennials are under huge financial pressure, this, like the sharing economy, would also be conveniently a matter of self-interest). Heck, maybe they already have and I just missed it.

Again, it’s like the way that these industrial towns abandoned their local culture to pursue cool city culture, only to have those cool cities re-appropriate working class culture – Pabst, workwear brands, etc – for themselves. Now these Rust Belt cities are re-importing their own culture back as supplicants. Remember, back in the 90s, the cool cities list used to frequently include the number of Starbucks locations as an indicator. Things change fast.

I like being able to get a good cup of coffee in these industrial towns now. I think it’s great for cities to have nicer stuff. But don’t ever make the mistake of thinking that by itself will change your relative standing in the marketplace.

The Urban State of Mind: Meditations on the City is the first Urbanophile e-book, featuring provocative essays on the key issues facing our cities, including innovation, talent attraction and brain drain, global soft power, sustainability, economic development, and localism. Included are 28 carefully curated essays out of nearly 1,200 posts in the first seven years of the Urbanophile, plus 9 original pieces. It's great for anyone who cares about our cities.